Today’s post is all about the beer brewing class that Sierra and I recently hosted in our home! I have wanted to learn about the ancient art of brewing beer at home for a long time.

Starting Out With Lacto-Fermentation

I started brewing lacto-fermented beverages around thirteen years ago. It is so fun and I enjoy the experimentation and the health benefits of fermenting veggies, tea, fruit and milk. For a while now, I have been wanting to make beer or ale. I finally got the courage to face making beer, which always seemed a bit daunting. Recently, I read Wardeh Harmon’s book The Complete Idiot’s Guide to Fermentation. After reading her chapter on brewing beer and ales, I thought I can do this. Her recipes were simplistic, and very straight forward.

I also watched Ruth Goodman from the BBC’s Tudor Monastery Farm make ale. She was so amazing because she went through the whole process of making ale, even malting her own barley. Of course, in that time period there were no thermometers and no refrigeration. It was just her brewing in a lovely old brewery room. She talked about the fact that women were the brewers, not men. I thought well, I will take my place in the history of women and make ale. If she could do it in a Tudor style kitchen, then I can too.

There is a story behind my fear of making beer. It is a story that is a bit loaded. I grew up in teetotaler household. If you have any background in the Evangelical world, you are probably not aware of how much the roaring twenties and Prohibition has affected you. The pushers for Prohibition were mainly good people from Evangelical churches who thought that, by obliterating alcohol, they would get everyone off the bottle. But all they did was to make our country a nation full of drunks. So much for making laws to make people vice-free! I am a product of that history, and so are most Americans. Because after Prohibition, most of the alcohol made in the states became industrially produced, not locally crafted.

So, I got a little freedom in Christ. I learned a little history about alcohol, both from a Biblical and practical point of view, and how it is made. And the crux of it is, industrially produced alcoholic beverages are made to get you drunk. They are pasteurized and stripped of any nutritional value. Most of the world makes their own beer, or buys from small breweries that do not strip all the good out of beer or ale. I am glad to say that there is a huge swing in the brewing world to bring back the old ways. All I can say is Hooray!!!!!

The Historic Tradition of Beer Brewing

For centuries, unpasteurized beer and ales were the world’s clean drinking supply. The Western world drank beer, ales, and wines because they were far safer than their drinking water. This was the case up until the beginning of the last century. There is within all of us, a memory written in our DNA, of the lacto-fermented beverages that sustained our ancestors with important mineral ions lost during hard labor. Beer and ale were the main source for the the life giving lacto-bacilli that provided lactic acid, B vitamins and digestive enzymes to break down food, all in a portable drink.

My beer and ale making journey started by hosting a beer tasting get together. Sierra and I invited a group of friends who were interested in making beer. Everyone who was invited brought a couple of craft made beers or ales from the market. We made a variety of foods to highlight the different flavors in the different beers. Sierra has a set of cordial glasses that were perfect to taste small amounts of all the different kinds. The get together was a wonderful time and very informative.

Our little group met together again a couple of weeks later to go on a field trip to Dayton, Ohio. We drove down to a place called Brewtensils which is a nationally ranked brewing supply store. All of us decided to all go in together and buy a brewing kit to make a couple of batches of beer or ale. We bought grains, malt syrup, and yeast. The guys in the group decided on doing a pre-made kit for a Belgian Style Beer. A couple of weeks later we all got together and we made an English style Ginger Ale. We got the recipe from Wardeh Harmon’s book The Complete Idiot’s Guide to Fermentation.

The results from our first try at brewing beer were simply refreshing. I was really pleased with the results of our efforts. It was fun and much easier than I thought it would be. I highly recommend Wardeh Harmon’s book as it is straight forward with no frills, and features very achievable recipes.

You can find some really reasonably priced brewing kits on Amazon here and here.

This summer I plan on making Elderberry flower Sparkling Wine and Elderberry flower ale. So I encourage you to try some home brewing. Perhaps you could host a beer brewing class of your own and share the experience with friends! God bless you on your journey!!!!

Here is a selection of beer brewing ingredients at Brewtensils in Dayton, Ohio.

Here is the kit that we purchased as a group. 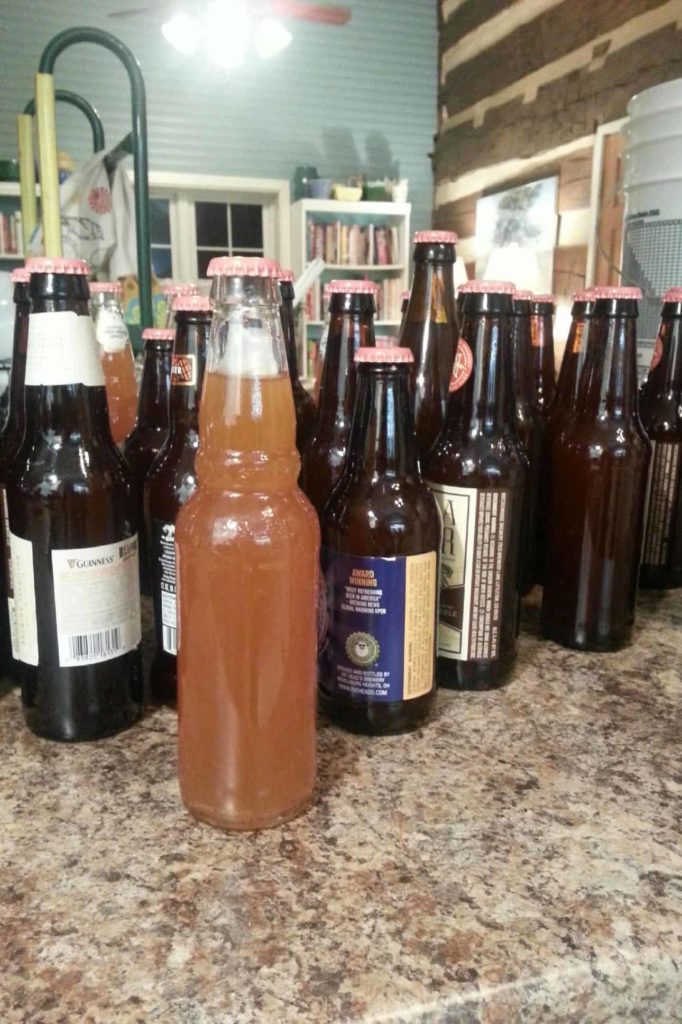 Here is the end result: ginger beer! We used recycled beer bottles that we sterilized and topped off with a bottle capper. 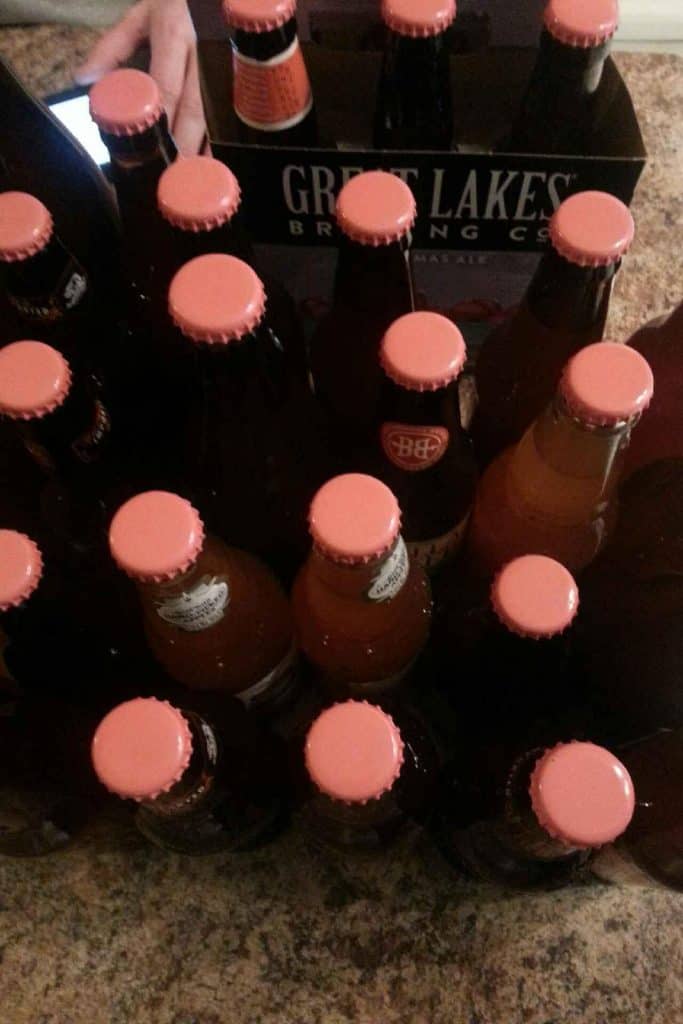 Pink caps for the girls’ beer! 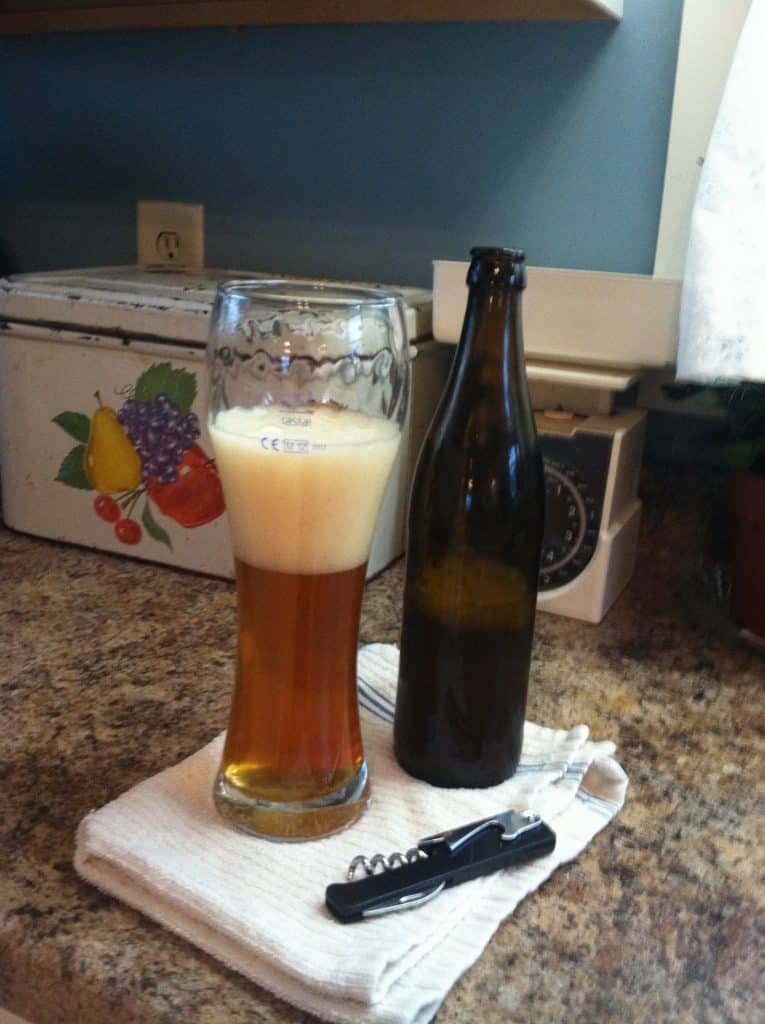 Refreshing, full of vitamins and minerals and super tasty!